When we started Cosmic in 2009, we knew we needed an identity which would describe how we played (wanted to) and felt about bike polo. We started looking into Egyptian mythology for inspiration. And the Eye of Horus instantly made sense to us, so we set about creating a relevant logo based around the eye symbol.

Nearly 5 years on from the original Cosmic Eye logo we feel it’s as relevant as ever. And as we begin the next evolution of Cosmic, we thought it would be fun to look back at our timeline and see how the EYEconic logo has changed. 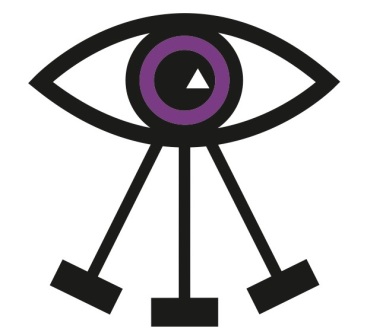 2013 – The logo is refined further by removing the eye brow and mallet pole ends. Creating a bold and simple mark. The iris returns to purple, the original colour of Cosmic.

2011 – All text is removed from the logo, leaving just the Cosmic Eye as the icon. The iris changes to teal.

2010 – The logo is used briefly as a badge in the shape of a triangle. 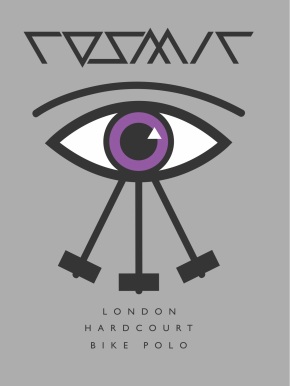 2010 – A new Cosmic wordfont is designed. Made from triangles, each bar represents the 3 team members as well as their bike polo playing strategy. The 3 is dropped from the name and the team becomes simply known as Cosmic.

2009 – The original logo is refined to become more symmetrical in shape. The bicycle wheel in the eye is replaced by a small triangle glint to represent the teams polo playing strategy. The team name and city of origin are added. 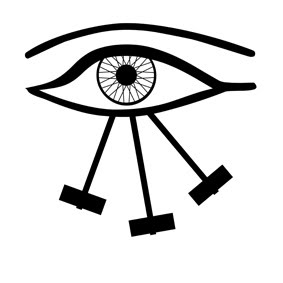 2009 – The original logo design is created based on the eye of Horus, the ancient Egyptian symbol of protection, power and good health. The design incorporates 3 mallets and a bicycle wheel to represent the game of bike polo.

One thought on “Evolution of an EYEcon”