During a recent visit to Japan as part of my RTW trip, I had the pleasure of hanging out and playing polo with the awesome Tokyo Bike Polo crew.

Whilst there, I took some time out to talk with Riki, one of the main club members and all round nice guy, about the position of Bike Polo in Tokyo and Japan.

Riki: My name is Riki, one of the first “hardcourt bike polo” players in Japan.

C: How did you start playing bike polo?

R: I grew interested the first time I saw polo in 2008 at CMWC. I saw polo again at ECMC 2009 (in Coppenhagen) pre-event and ECMC Berlin and decided to play with young Japanese messengers and Atsuko.

C: Why do you still play bike polo?

R: Each progress I make, I find more challenges and discover a new vision. I find it very exciting.

C: How did bike polo start in Tokyo and where else in Japan is bike polo being played?

R: As I said, two messenger events, CMWC and ECMC were the main cause. The reason why I couldn’t start playing polo right away after I got back to Tokyo in 2008 was because I couldn’t get enough people to play and I had a hard time finding HDPE pipe and ski pole stocks. In 2009, more people were interested and moved by their enthusiasm, I started looking for the equipment more seriously, translated the rules, and started playing.

Now, even outside of Tokyo, from the very south island of Okinawa to the very north, Hokkaido, people all over Japan play bike polo. Osaka, Tokushima and Hukuoka clubs are following Tokyo and they are very active and competitive.

There are links to each club on the THBP blog, so please check them out.

R: There are about 15 active players and total of about 25 players in Tokyo. Now we have regular practice on Wednesday night in Komazawa Park or Kugenuma skate park on the weekends.

C: Does Tokyo have any fixed teams?

R: We sort of have teams but they are kind of in between right now…Once in awhile, people team up with each other and play in tournaments, but they don’t always play in the same teams. If I have to say one way or another, we don’t have teams.

C: Describe the courts you play on in Tokyo.

R: Komazawa park is an open space without a fence. The ground is very rough and mallet heads wear out quickly (laughs). Before the big earthquake in 2011, all of the street lights were on until 11pm and it was good place to practice, but now fewer lights there work and it is kind of hard to see the ball at night.

But Japanese hardcourt bike polo started in this park, it’s our roots, and it is an essential place for us.

Kugenuma skate park (that Mat Cosmic likes) is about an hour away from Tokyo on a train. The entrance fee is 300 yen and it costs 5000 yen/hour if you want to rent out the court which is an old 50m sized swimming pool. It is a great space with tall walls and the ground grip is pretty smooth. The location isn’t so bad either, with a bean next to the court and the view of Mt. Fuji on sunny days. 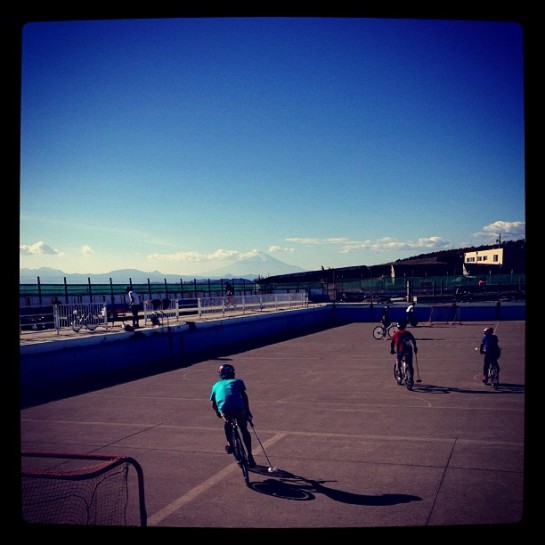 C: What is unique about Tokyo or Japan bike polo vs rest of World?

R: I wonder…People say our play style is detail oriented, but I would like to hear what European players think of us (laugh).

C: Where do you see the future of bike polo in Tokyo/Japan?

R: If more young players start, our scene would be bigger and the environment surrounding us, including the courts, would improve, but I think it would take awhile.

R: Bike polo players of the world, please come to Tokyo. The city is a little far from your town but it had unique and exotic views, culture and friendly polo players are waiting for you.

C: Big thanks Riki. Cosmic looks forward to seeing you and the Tokyo club on a court again soon.