It’s got quite a VHS quality vibe to it, which got me thinking back to some of the BMX and Skate videos I used to watch in the 90’s.

The use of VHS video was as important as the printed zine and screened t-shirts to these emerging subcultures. It was another “DIY” medium which helped put physical content out to the growing global scenes.

There was something special about waiting for the latest big video release. Brands and riders were defined by the quality of their recordings. Each release would mark the next evolution of progression as well as set the trend for that period.

Getting hold of such videos back in the 90’s was not easy. You had to mail order from magazines and wait ages for it to arrive in the post. And when it was finally delivered, you’d gather all your rider mates round for the grand premier screening.

The sketchy picture, simple screen graphics and fuzzy sound quality only added to the raw feeling of the content.

A sign of a good video was how beat up the paper box was, as this showed it had been passed around many hands.

These days, so much amazing and crisp quality content is put up on the internet every day, by any body. This is great, as it makes everything so accessible in an instant. However, at the same time, nothing is given the chance to make a lasting impression or become iconic, as it just fades into the back pages of google as fast as it was posted.

There is something quite personal about the physical format. And when put on a shelf as part of a collection, it shows a visual archive to the good days gone by.

With this thought, over the next few weeks, I’ll be posting up a selection of the most influencial VHS videos, ironically now saved on the internet.

First up are two groundbreaking videos from Hoffman Bikes, the company founded by the legendary BMX rider, Matt Hoffman. Head First, released in 1991 and Madd Matt from 1994.

Back in the 90’s Hoffman Bikes made the strongest and best products and had the team to match. The  riding in both these videos pushed the envelop on Freestyle and Mad Matt Hoffman was at the helm. 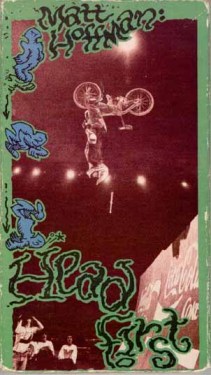 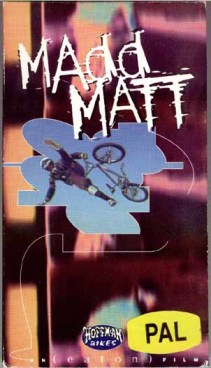